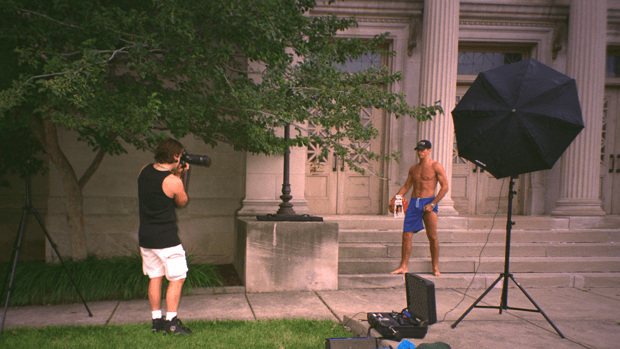 Behind The Scenes at Model Photo Shoots

When new college guys think of photos shoots, they think of the photos on the pages of a magazine. They see the results after the shoot if completed, and after the ink is dry.

But what occurs during the photo shoot? What is it like for the male models who appear in the photographs? As a college guy trying to become a model, you can learn a great deal from what previous guys experienced.

Why learn about modeling photography? Because it makes you more informed and easier for photographers to work with you. You don't need to be taught as much as other new guys. Remember, the more you learn from our modeling tips, the more you can jump ahead of your competition (other college guys). And modeling auditions and acting casting calls are all about beating your competition. Plus, learning about male photography helps you avoid being taken advantage of by the many unscrupulous individuals who seem to be drawn to male modeling.

Here are some stories from model photo shoots.

If you do your job well, you can have fun afterward

After photo shoots are finished for the day, male models are always looking for a way to blow off steam. Guys in St. Pete ended of week of grueling on-location photo shoots by posing and partying with girls who showed them their tits.

Weather is often an issue when dealing with outdoor photo shoots. Bad Weather all day failed to cancel one male model's shoot.

120 coconuts later, a sexy beach photo was created in seconds prior to an approaching storm and shows how you since you cannot control weather, you sometimes have to capture photos quickly. Sometimes bad weather prevents us from holding any shoots like this story about a tropical storm shows.

At the Photo Shoot

Sometimes there can be Bad Weather too many people at a model's shoot.

Sometimes we must sneak into photo locations to create their photos. Sometimes property owners ask them to leave. Since our models are often wearing little or no clothing, we needed to hold one ass early photo shoot during which everyone - model and crew were groggy. It was our earliest photo shoot ever!

Some modeling pictures were rough on the models who posed for them.

Sometimes male models found themselves being naked in public to capture their pose.

Things can also get a little crazy. If girls show up because they see some hot guys, we put them to work! A crazy street fight almost broke out during one at photo shoot at a beach and photo shoots on water always turn into a kickass boat party when alcohol gets involved.